During March the Department of Government will be visited by Alex Dukalskis, an associate professor at University College Dublin in the School of Politics and International Relations. 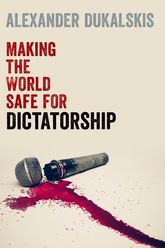 Alex has recently published the book "Making the World Safe for Dictatorship" (Oxford University Press) which deals with the international politics of authoritarian states including the projection of positive international images (hosting the Olympics in China) and repressing opposition and criticism (Russian poisoning of dissidents).

He researches and teaches on authoritarian states, Asian politics, and international human rights. His work has been published in several leading journals, including the Journal of Peace Research, Human Rights Quarterly, Journal of Democracy, Review of International Studies, Government & Opposition, and Democratization.

Alex Dukalskis will give a guest lecture for the Uppsala Forum in the Brusewitz Hall on 10 March at 10:15.Title and abstract below.

Authoritarian Snapback: How Dictatorships Tame the Spread of Liberal Ideas

We are witnessing an authoritarian backlash to liberal ideas and norms. This caught some observers off guard because they assumed a high degree of inherent appeal to liberal ideas and institutions. They assumed that socialization stemming from the heyday of post-Cold War liberalism in the 1990s would take on a life of its own and overcome institutional constraints. However, the shaky foundations of liberal soft power have been exposed. This enables authoritarian states to absorb the advance of liberal ideas more effectively or even transform them into enablers of authoritarianism. Presenting both completed and in-progress research, this talk will illuminate the “authoritarian snapback” of non-democratic states advancing their preferred norms, images, and ideas into the global public sphere. It will draw on a range of data, including interviews, public relations documents, episodes of repression and censorship, and authoritarian state propaganda. It is hoped that the findings are useful to academic researchers and those interested in policy or societal responses to the authoritarian snapback.